I just finished playing at the first ever Warhammer World Series. Devised by Mark Skilton, the concept departs from the normal tournament format of of bringing an army and playing several games with it. Instead, you play five games with someone else's army (usually Greg Johnson's, AKA Hoodling), a new one each round.

Greg ran the event on the day, and stripped back all soft scores (composition, sportsmanship and painting) so that you were only playing for Battle Points. This made for a very simple setup, where the focus was even more battle-oriented than usual. Players rocked up, played five 1500 point games and were done. Even list design was not an issue; they were all pre-designed and fixed to a table, scenario and opposing army with a comparable strength. Each round was like speed dating: onto the next table, army and opponent. Rounds weren't 5 minutes, but there were very strictly enforced time limits.
I will briefly describe my 5 games. Sadly, I took no photos. 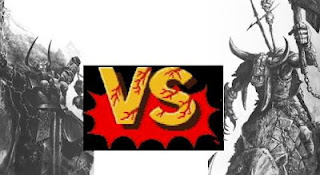 Game 1
Opponent: Adrian Stakula
Scenario: Blood and glory.
My army: Khorne Warriors of Chaos.
Opponent's army: Orcs and goblins.
I chose the Khorne mortal list which contained lots of flighty stuff, a few re-directors and no magic. Staks was left with magic and shooting superiority, a unit of 14 (why!?) wolf cavalry, a big block of black orcs and six trolls. The game took a while to get cooking. The orc artillery destroyed itself on its first shot and a few warriors were killed by a Foot of Gork. The game really got interesting when the depleted warrior unit charged into the still-very-healthy black orc unit. The warriors pulled out the cheek, and not only managed to beat the black orcs, but also break them with steadfast leadership 9! This wasn't helped by the fact that the black orcs had been put onto the table in a formation 8 models wide, but Staks believed that they were 10 models wide. I was happy not to have those extra attacks back! The warriors overran into a night goblin bunker containing the BSB, shaman-general and that was pretty much game.
Result: 20-0 win to me 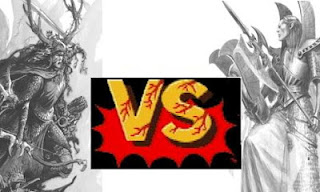 Game 2
Opponent: Chris Penwarden
Scenario: Watch Tower
My army: Wood Elves
Opponent's army: High Elves
Chris looked at this scenario, like I did, and decided that there was little in the wood elf army to hold the tower with. He took the High Elves and I was left with the wood elves. My army was fairly standard for a wood elf list of this size back in 7th ed, but lacked the more common 8th ed inclusions like treekin. It had a healthy number of archers and dryads, a level 2 mage, Hail of Doom BSB, treeman ancient and some wardancers to hide characters in. Chris had a big block of spearmen, a small unit of white lions, some archers, a lion chariot, BSB and level 4 shadows mage.I opted not to take the building, instead waiting to try and win it back.
I decided that the hardest unit to shift from the building would be the spearmen, as they die just as easily as white lions but there are more of them! I put as much firepower into them (including Hail of Doom) before they got into the building, and got them down to half strength. I then concentrated on softening up his archers and charriot, whilst alternating strikes on the building with treeman and dryads. I managed to kill the BSB with some lucky dryad attacks but still not shift the unit.It came down to the last turn where my wardancers and BSB charged the watchtower filled with only nine archers and the mage lord, augmented by Mindrazor. My wardancers opted for the defensive dance, and the BSB challenged the mage lord without opportunity for refusal. I took one wound and in return killed most of the spears and wounded the mage. They held due to being steadfast, and I was denied the tower. Time was up, so despite the fact that there could have been more game time, we had to stop. Despite the loss of the tower, I had actually killed more stuff and the result was quite close.
Result: 8-12 loss to me 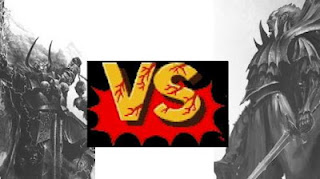 Game 3
Opponent: Mark Audley
Scenario: Battleline
My army: Slannesh Mortals of Chaos
Opponent's army: Vampire Counts
When I drew Mark, I was pleased because despite being a well-experienced general, Mark is exclusively a Bretonnian player and I hoped to take advantage of this. Clearly it wasn't really holding him back, as he was performing roughly as well as I was. I took the Slannesh Warriors, which were much like my Game 1 Warriors of Chaos army but everything was Slanneshi. I didn't have a BSB (!?) or any knights, instead having a level 2 mage and a giant. Mark was left with a horde of ghouls, zombie and grave guard, a few fell bat units and a spirit host, with a Necromancer lord and Wight King BSB on foot.
I quickly encircled the undead host and  hit the ghouls with a chariot. It shrugged off most of the ghoul attacks and was joined in the following turn by the giant to easily finish them off. The Warriors easily dispatched the zombies, leaving my fast cavalry to take out all the fell bats and block the movement of the huge (and scary!) unit of grave guard. Eventually, I had mark surrounded, down to just the grave guard with both characters and nothing else. At this point I charged the grave guard in the rear with the giant. So far, everything in the tournament had been WYSIWYG (What you see is what you get), and the grave guard models were equipped with shields. Still, the giant had five wounds left and only 4 grave guard could retaliate. If I got a lucky jump up and down result and favourable thunderstomp, I had a chance of destroying the grave guard for no risk (wrong!). Instead, I tried to pick up a grave guard, which wounded me, and then his four great weapon (not hand weapon) attacks finished me off. Mark and I already agreed that we weren't "playing for sheep stations", so I accepted this quite happily. A more competitive player may have tried to renege on this final charge, claiming misinformation. Indeed, I could have simply looked at the list, or even asked Mark to clarify. In the end I quietly accepted the giant's fate and the 265 victory points attached. I had lost very little (except for the giant) and Mark had lost nothing of real importance.
Result: 11-9 win to me 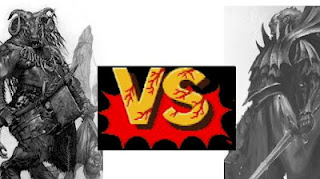 Game 4
Opponent: Aaron Graham
Scenario: Battleline
My army: Beastmen
Opponent's army: Vampire Counts
I haven't had much to do with Aaron, as he usually sits around the top tables out of my reach. I hadn't used either army before, but the Beastmen seemed easiest to play. Chris Cousens had designed them be be point and click. I had a ridiculous doom bull on flying carpet, gore bull BSB to lead a horde of ungor, three chariot (one was a razorgor), a bunch of chaff and a jabberslythe. Aaron had a block of ghouls, block of zombies, 10 black knights, a varghulf, mounted vampire BSB, a cairn wraith and a vampire lord with what I like to call red mist.
The doom bull got stuck in with the ghouls pretty early on, and was holding his own (he had a 2+ save so didn't care about the poison), but only really started blending when I noticed his weapon game him Always Strikes First with the all-important re-rolls. Now it was on- the ghouls blended well! I tried to sneak up with my chariots hiding behind a column of raiders that the black knights couldn't charge past, but a Gaze of Nagash took out the jabberslythe and panicked the razorgor chariot of the table. My flank was looking worried. I managed to charge into the black knights' flank with my ungor horde, and eventually wear it down after the BSB cascaded himself. They then turned around to spy the vampire lord and wraith hiding in the zombie unit, with my Doom Bull on the other side about to finish off the ghouls. I charged into the zombies, but the wraith engaged my BSB (nullifying both of them) and the lord began dissecting the ungors in an unsafe manner. I held up because zombies squish good, but by the time my lord arrived not an ungor or zombie was alive. It had been close; I really shouldn't have sent the ungors into the zombies; I would have had a better result if I had left it alone.
Result: 11-9 win to me 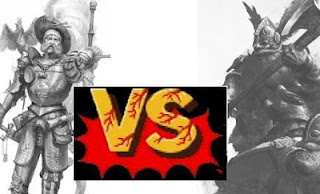 Game 5
Opponent: Johannes Scherperherperherperherperderphuizen
Scenario: Battleline
My army: Empire
Opponent's army: Dwarves
I always enjoy my games against 'Hannes (Scherpenhuizen, but this is the most mispronounced name in Melbourne Warhammer), as he shares my sense of humour on most things. These armies seemed pretty even, but I opted for the Empire because of mobility. I had a big unit of knights, four demigryphs, horde of spearmen, some crossbowmen, a cannon, BSB, general (both mounted with some mediocre* items) and level 2 wizard with Pit of Shades and Minwazer!!1! (I think that's how it's spelt). Hannes had two blocks of scary, elite dwarves, a grudge thrower, gyrocopter, organ gun, some thunderers, runesmith and tough-as-nails BSB and lord.
*Actually "mediocre", not "poor".
I concentrated on taking out the dwarven firepower, which would allow me to pick off the rest of the army at my leisure. Apparently both sides had agreed on a suicide pact before the battle, as when I neared the organ gun, it blew itself up. The gyrocopter then looked menacingly at my cannon, so the crew decided the stress was too much and took their own lives. The demigryphs were mere meters from pounding out the grudge thrower, so the dwarven crew popped their own pills. After having seen his spearmen unit taken to nearly quarter strength by the awesome steam gun on the gyrocopter, the wizard popped his own pills and took out even more of the spears. The BSB managed the take out the gyrocopter, leaving us after 4 turns with two units of dwarves, some limping infantry and in-tact Empire Cavalry units. The knights had clearly been practising dressage and avoided the dwarven infantry (my general was named Ann Romney). The Demigrphys closed on the unaided hammerers and managed to wipe the unit out after three turns of combat.
Final Result: 13-7 win to me.

Overall, I took away 63 victory points and 5th place. This is arguably one of my most successful tournaments ever, so I am very pleased with it. Combined with my recent not playing of MOAB (which netted me 29 Rankings HQ places), I should be doing alright. With a heavy emphasis on actual gameplay and none on list building, it perhaps highlights something interesting to me. I may write about this in a future blog article.

A big thanks to Greg and the rest of the Hampton crew for putting on a good show. It was a lot of fun and a really nice idea of Mark's. I look forward to having another go next year!