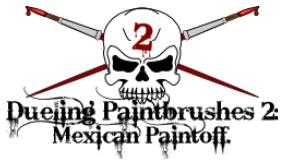 Last year, Owen and Greg took part in a painting challenge called Dueling Paintbrushes (new rules). Essentially it was a pledge to get stuff painted in a fixed time. It is on again this year, so I'm down to get 1000 points of Orcs painted in the month of November. So are a dozen or so people from Hampton, across various systems, painting equivalent forces.

I don't actually have 1000 points assembled but not painted, so my first challenge is to get the stuff ready to go! Here is what I think I can have ready by November. It says nothing about what will be manageable in November!

Big Boss (133 pts)
1 Black Orc Big Boss (Battle Standard Bearer)
This guy will be mounted on a boar. I'm going to use the great stag for inspirtion here, but cavalry is much harder to match to the real thing, so it won't be as close a match as the other big boss.

Night Goblin Mob (240 pts)
19 Night Goblins, Full Command, 6 fanatics
The fanatics are going to be war dancers. I'll start converting up some common gobins to look like they're dancing. They old plastic kit actually bashes together to look quite annimated if you split the legs through the crotch (OW!) and pair one standing and one mounted leg together.

Giant (200 pts)
Giant in much the same get-up as the trolls; wooden suit.

No, not a legal force, nor does it need to be. So far, all of the infantry is assembled, except for a musician for the arrer boys. So I need to get trolls, a giant, a boss on boar and 6 fanatics assembled in two weeks. Here goes nothing!

Edit:
Apparently, the force does need to be legal. Oh well, I guess I'll convert up a mage to do instead of the three extra fanatics. Boo!

Goblin Great Shaman (145 pts)
This guy will be made to resemle the male spellsinger, rising up into the air with his fists clenched. I'll be putting some magnets in his robes so that he can be put on and off a base and onto the planned arachnoroc.
Posted by Unknown at 17:27