So begins another attempt at getting some stuff painted in an amount of time that isn't just "whenever".

Here is my starting picture: 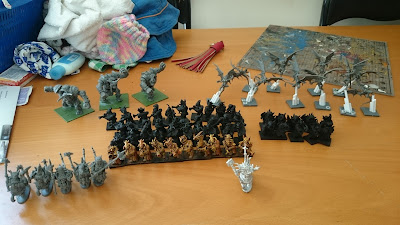 Technical arguments aside, it's not a very good shot for several reasons:
This is wasn't my intended submission, but with my plan to multi-base at slightly lower densities, I thought I should still paint the requisite number of actual figures. This meant my horde of Blacksouls, with only 30 models, may not satisfy the criteria. The latest FAQ would support my intent, but I didn't want to go quite that light on models. So Decimators it is (the only infantry I have 40 of).

So my list:
Progress updates as I make it.