Last year I bought some Ogre Pirates from Titanforge. Having no time or space to work with them, they've sat unused for a whole year. Until last week... 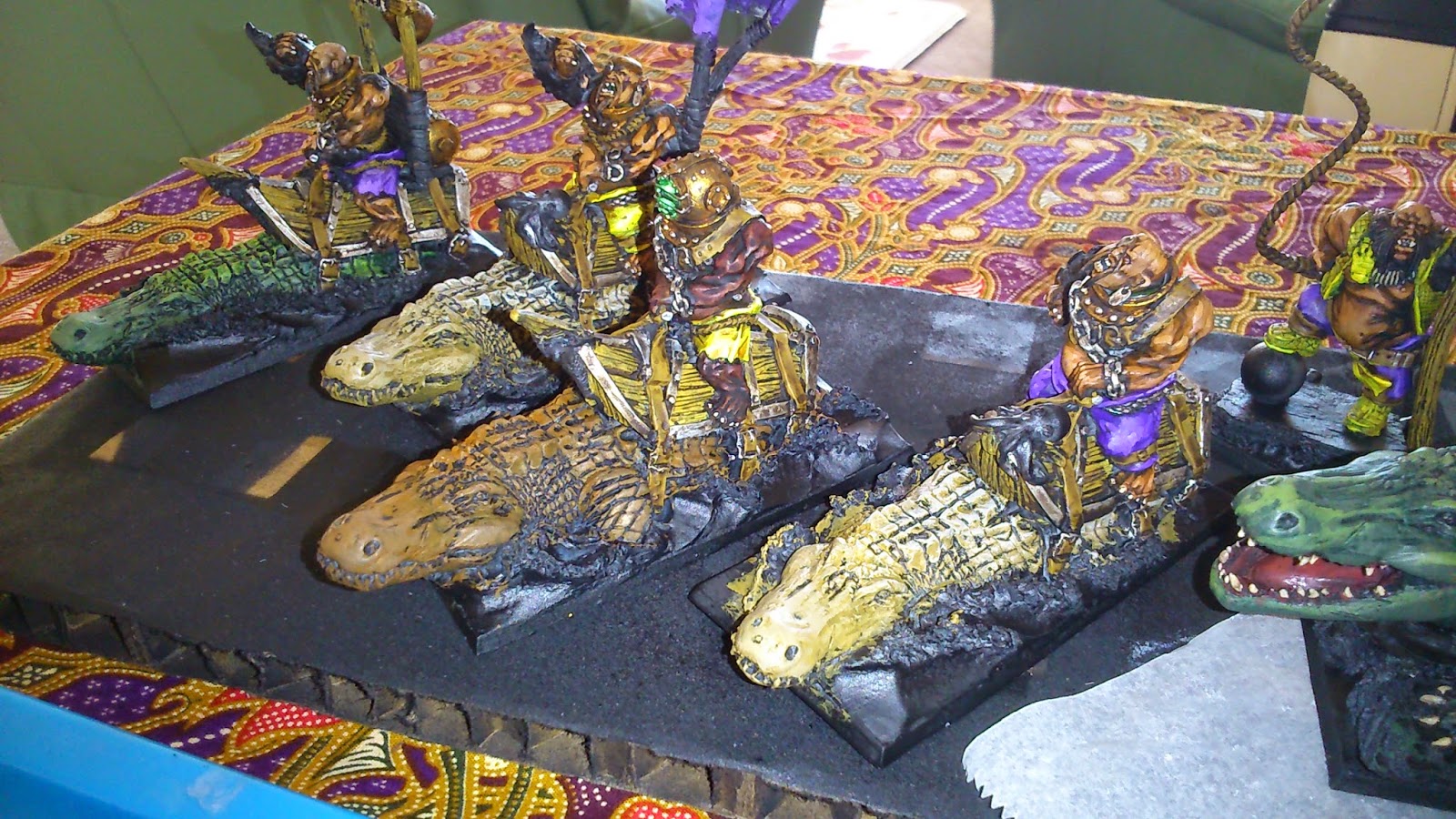 It's been really nice to be able to work on my figures, and I these school holidays I've made good use of my available time. I bought these pirate figures from to bulk out my old ogre army, which hadn't seen the table since 7th ed (actually, it saw one game when the 8th ed book came out) and really wasn't suited to play in this environment. It lacked the new ogre heavies; Mournfang Cavalry and an Ironblaster. I discarded a lot of my more exotic conversion materials when I moved (a few moves ago, actually), so I didn't want to get too deep in converting figures. Fortunately, these figures fit my army perfectly. Perhaps a little too perfectly. Here is a little bit of Work-In-Progress for you. 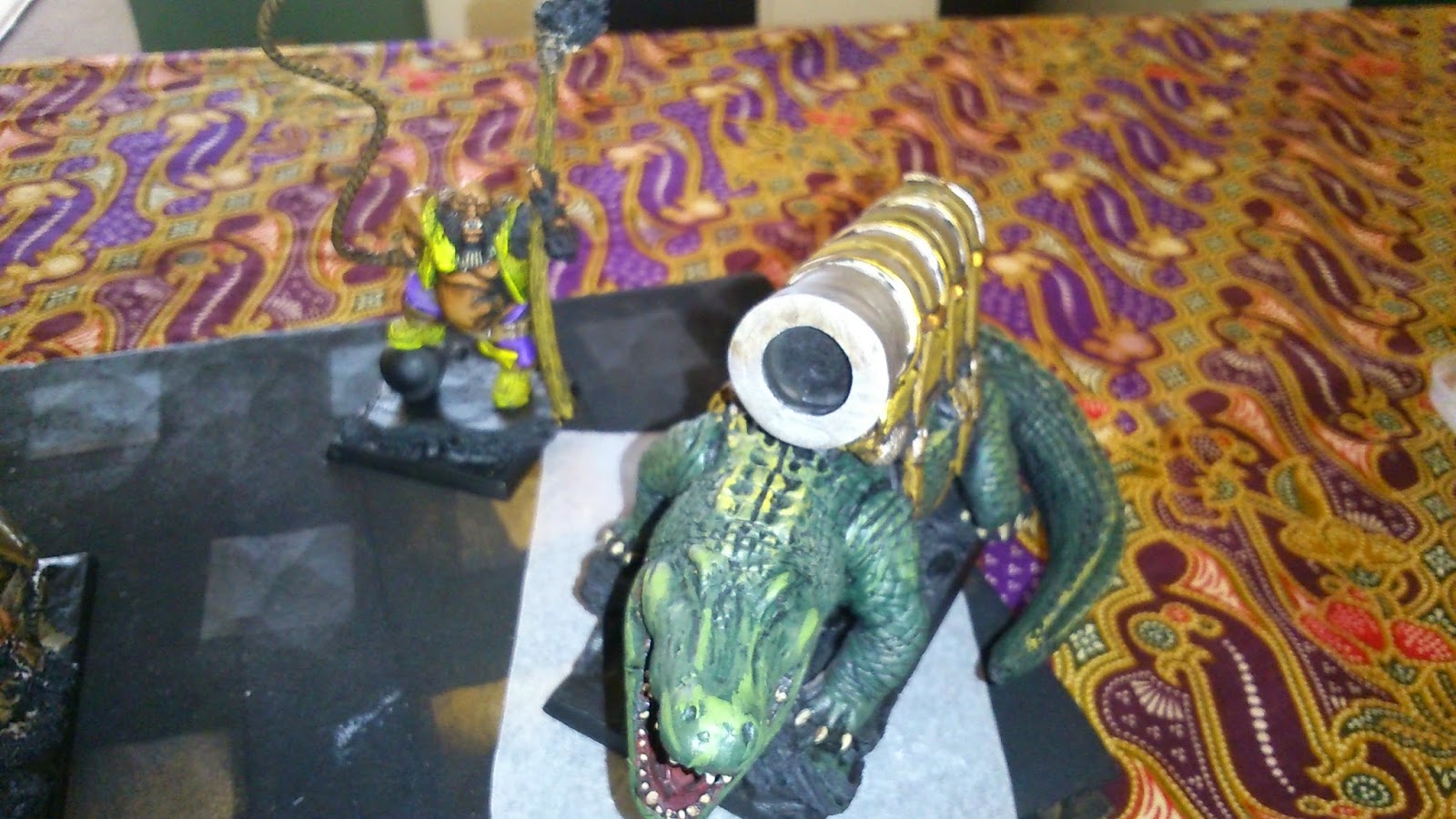 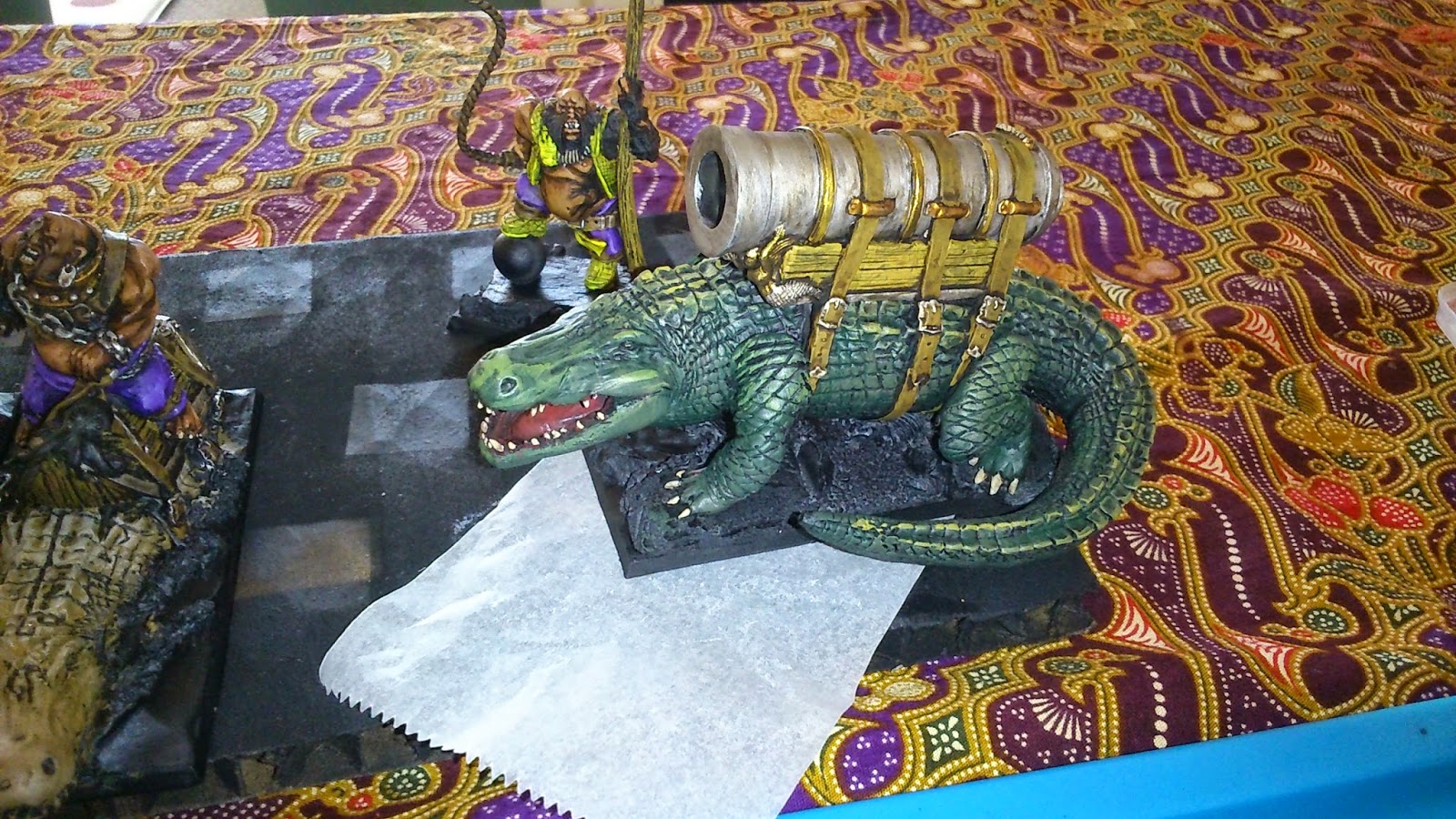 First up is the ironblaster. Most of the detail is in the crewman, which is a little redundant but does add flavour. Unlike the real model, the crewman here is on his own base. Not correct in gaming terms, but it wouldn't be hard to shuffle him around when he got in the way. The croc is pretty impressive, and takes up more than a mere chariot base. The crewman has a bit of weirdness going on with his left sleeve, but I haven't taken great photos of that to highlight it. The crewman's head is actually a GW ogre head. I find that faces are one of the features of a model range that stands out when you mix and match. The TF heads don't look too much like the GW ones, so for consistency I swapped. This simple change brings the model much more in line with the rest of my army, and I'm all about coherency. 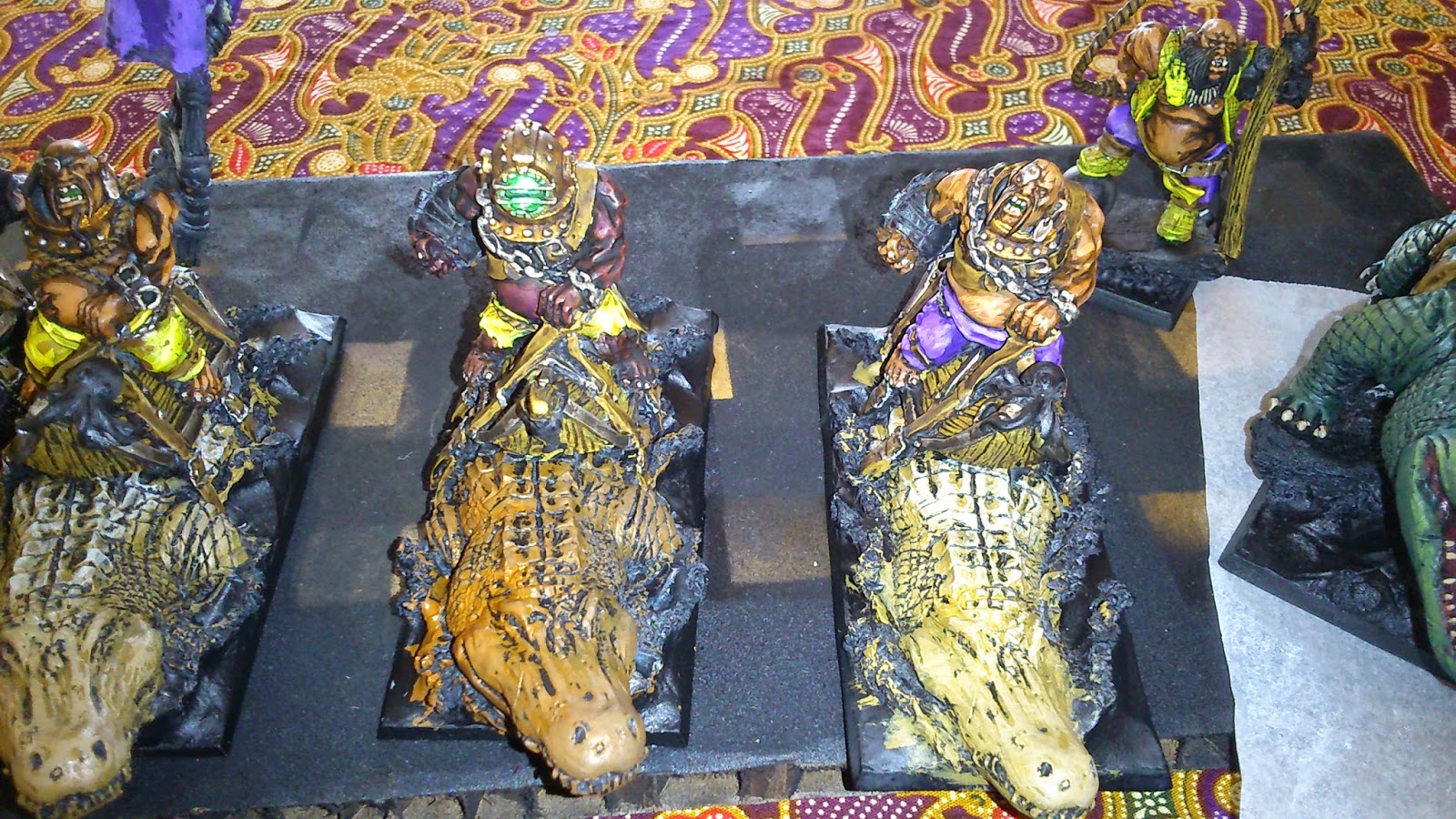 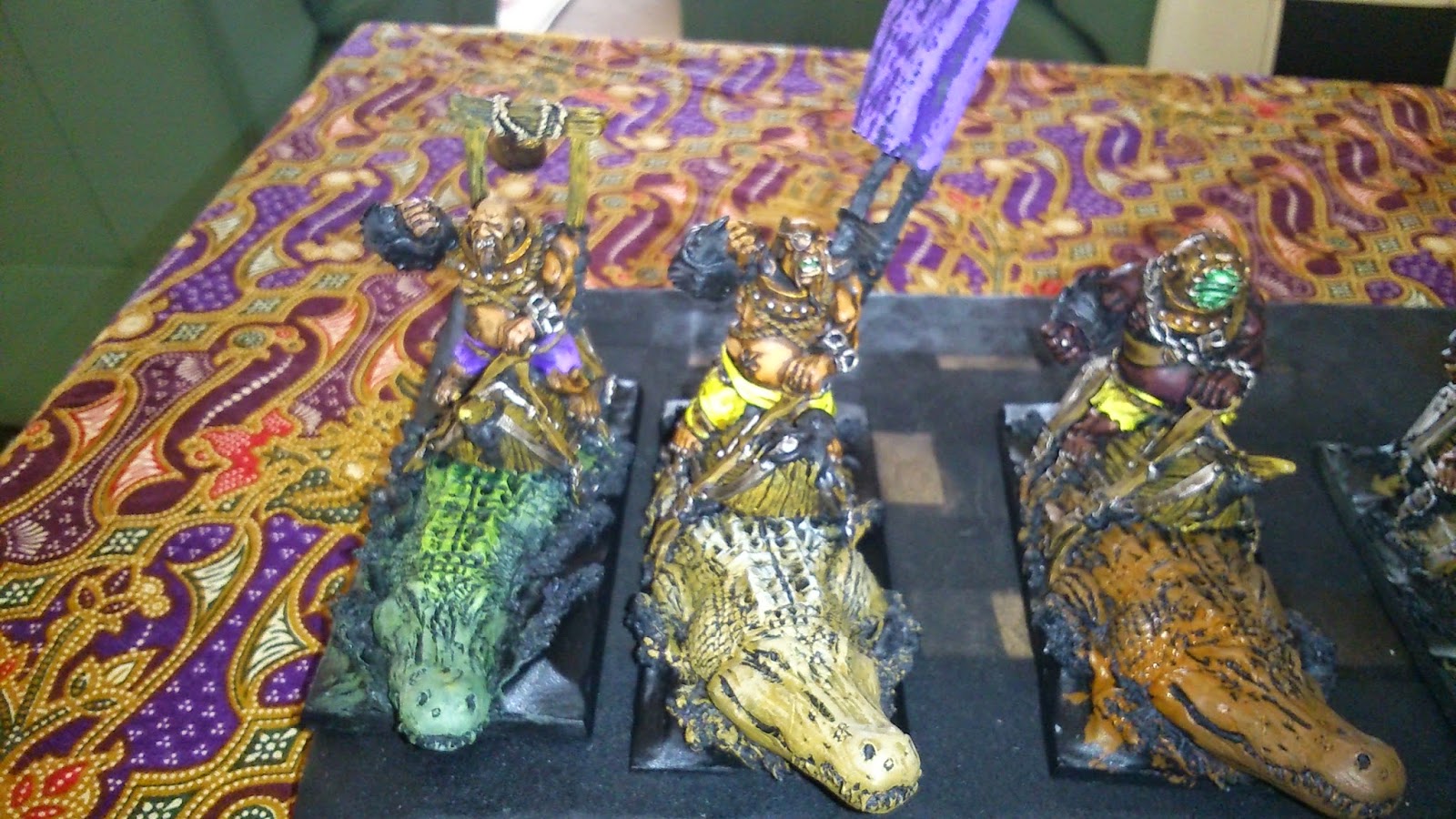 Next are the mournfangs. These guys were quite a bit more fiddly than the ironblaster, but I left a lot of those bits off as they're a bit more steam-punk than I wanted. All of them came with old-timey diving helmets and air cylinders on the back of the saddle. I took those bits off, and gave them all GW ogre heads. The exceptions were the champion, who kept his helmet to make him stand out (sorry, I couldn't resist dropping a Biogforge reference there) and the musician, whose bell poles had a cylinder attached. I'm not a huge fan of the organic looking ironfists, but the GW ones were all left-handed so I couldn't swap them in. I do plan to turn the champion's fist (a turtle shell) into a Blastoise shell with a couple of gun-barrels (representing his brace of pistols).

I am impressed with the Titan Forge models. They are a fantastic concept (even if I came up with it first) and they're well designed with lots of little details added. The casting is reasonably crisp, but I must admit that a few of the details are a little hard to distinguish. Some of them are completely unrecognizable, and will only be clear to me once I force them to with paint. Still, I have little to complain about as they have turned my force back into a competitive one with minimal fuss. I've just noticed that Titan Forge are now producing

gators on cavalry bases. This is similar to my idea of sharks, but requires much less work. Perhaps some sabertusks are in the works. I'm really hoping to get to a tournament this year for the first time in a long while!
Posted by Unknown at 09:43