ConVic is done for 2016. Here's a bit of a write-up. I must admit, I only thought to take photos from game 2, and I didn't' bother then because Greg was already taking them an he had an actual camera. I'm sure he'll do a write-up soon; I'll link it when he does. Enjoy my report!

My 1000 point list was the best gunline I could devise with my models at hand:
Two Regiments of shooters
A regiment of siege breakers
Two Goblin Blasters
Two Warlocks (one with inspiring)
A regiment of Berserker Braves

Game 1
Opponent: Andrew Goodman (the TO himself!)
Army: Abyssal Dwarves
Scenario: Kill
There wasn't a lot to say about this game, and I don't have any pictures so that won't make my 1000 words...
I think I managed to shoot out a regiment of Black Souls before Andrew engaged with my mostly-shooty army, but he had enough shooting to take out my blasters before they could impede his progress. The rest of his army closed on mine and made short work of it.

Game 2
Opponent: Greg Johnson
Army: Ogres
Scenario: Invade (get stuff into the opposing table half)
Greg's minor army was reasonably similar to mine, with a bit less shooting, a bit more combat and no blasters.
However, a lucky first-turn rout managed allowed Greg to get fire superiority over me, putting me well on the back foot. Given that my plan was to shoot him as he tried to get to me, I just didn't have the army to bear him. Not great for the scenario, either!

The army, whilst fun on paper, really didn't have enough guts to be effective. Oh well, I didn't have to use it any more.

My 1500 point army was all combat:
Two units of warriors with shields
A unit of Boomers
Two hordes of siege breakers
Two blasters
An army standard
A warlord on Chariot
A warlord on foot
(some items scattered around)

Game 3
Opponent: Kevin Gray Hamilton
Army:Varangur
Scenario: Dominate (have units within 12" of the center of the board) 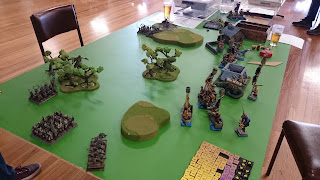 Kevin's army had a two unit of [Chaos Warriors], two units of [hounds], two units of [marauders], a giant and a sorcerer. I'm making a point of using the old Warhammer names, as this kinds of cost me a strong starting position. A unit of hounds was sloppily allowed into the flank of one of my siege breakers. With a pack of chaos hounds in my mind, I hadn't considered this a threat worthy of mitigating. I was proven wrong when they single-highhandedly took out one horde siege breakers and I had to use both blasters to stop them getting another, and there went my center. 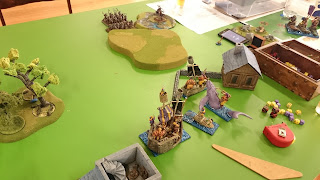 The right flank was looking stronger, but sadly I had to get models into the central area to score, so this wasn't much help. I also learned that Warlords on chariots are wildly difficult to manoeuvre. 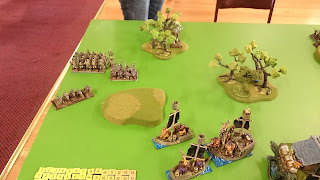 The left flank was a bit of a dance, and both of us really held off committing. 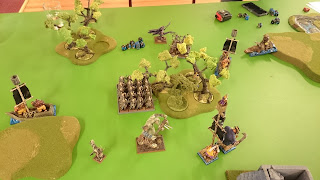 In the last turn, both of us suddenly realised our objectives, and both just kinda gave up the dance.Kevin had the advantage though, so the game was his.

I really learned in this game that I need to stop seeing Warhammer equivalents in this game. Even the lowly unit of hounds proved a massive threat, which I stupidly did little to counter until it had done its damage.

Game 4
Opponent: Mike Crossman
Army: Brotherhood
Scenario: Pillage
Mike's Bretonnian Brotherhood army had a bit of everything it seemed. I was concerned by getting outflanked by knights, so I deployed quite cagily behind the large piece of wall in my deployment zone. I was pretty knackered at this point, so I didn't think too much about what I was doing, which was obviously not a good idea! 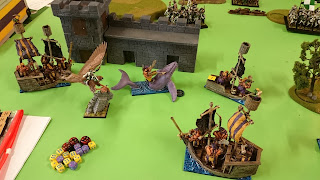 I ended playing less cagily than I had deployed, but the late change of plan fell in a heap and I was quickly surrounded and consumed. 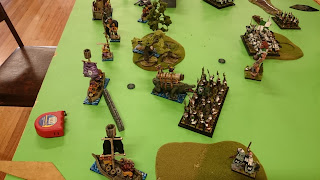 I don't recall a lot of what happened during the game, but it wasn't pretty.

Game 5
Opponent: Peter Spiller
Army: Undead
Scenario: Loot
Pete's army was fairly compact, and I though I should be able to drive my blasters up where I wanted them with little chaffe to get in the way. 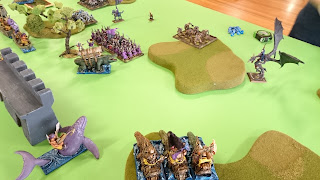 The right flank involved my chariots being held up by Pete's dragon vampire. Pete couldn't force a flank charge on either unit without risking retaliation, but I couldn't disengage from the situation. 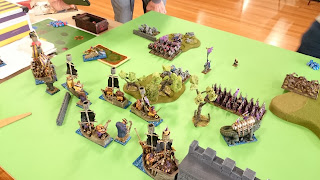 I moved up pretty solidly on the center and on the left. Blasters went for the objectives, as they would naturally deter Pete trying to reclaim them 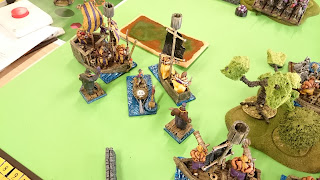 One blaster claimed a loot, but ended up losing it to a unit of wraiths whom my warriors had failed to wound. This meant the wraiths could still fly, so they did  in order to take out the Blaster with the loot. They managed this, but routed themselves in the resulting explosion! 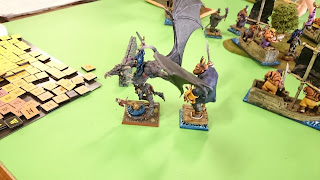 Eventually the dragon vampire came to collect the loot token. 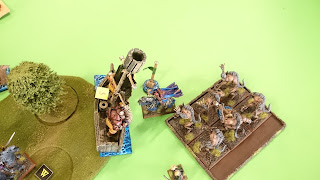 The unit of ogers who so incompetently failed to wound the wraiths or hurt this necromancer. Time to sack them!


Result: Pete had all three tokens.

Game 6
Opponent: Ben Morrison
Army:Undead
Scenario: Pillage and Kill
Ben is a Warhammer veteran (at least up until 7th ed), but this was his 7th game of Kings of War. I still didn't like my chances.
Ben had an even more compact army, with multiple cavalry units and three casters, one of which was Morgoth the Faceless! 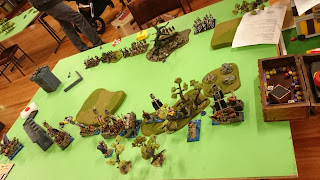 I grew a little bolder in this game, but not enough to get around the cavalry. 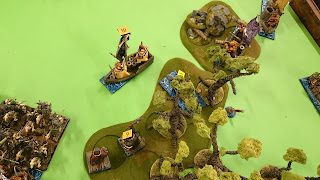 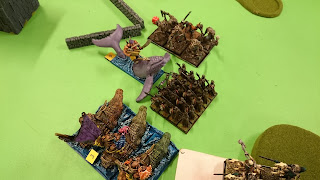 An unlocky final turn saw my charriots and warlord fail to rout this unit of mummies, despite over 30 attacks with thunderous charge. The two units didn't survive the counter-assualts.
I didn't actually manage to rout anything, but lost my own army in the process. Great!

Game 7
Opponent: Matthew Sellick
Army: Ogres
Scenario: Invade with Assassination
Matthew's army was quite different to mine. He had two Mammoths and a Legion of Ogres. I elected to assassinate the legion, so that I could concentrate my efforts. Matt targeted one of my Hordes. 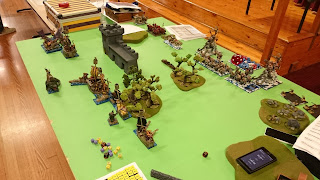 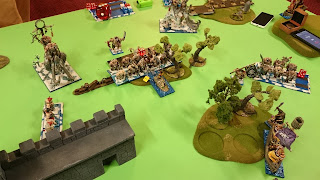 I managed to drive both blasters into the front of the legion, which put it right on the brink. 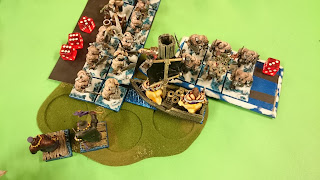 The berserker braves rudely ignored the efforts of a legion, horde and army standard. (snake eyes!) This allowed my siege breakers into the flank of the legion, and allowed the braves to take out the army standard. A bit of luck! 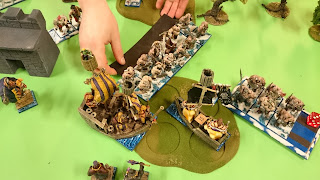 My siege breakers in the flank were more than enough to mop up the legion. 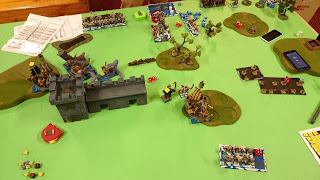 The legion was dead, my army was still in pretty good shape. Matt made a better effort than me to get his stuff into my table half, but with the assassination, I was able to snatch the victory.

I ended up coming dead last in this event. All the same, it was a lot of fun (as tournaments always are!) and I hope that the Kings of War community is able to fill the void left by the Warhammer community. To that end, I will be entering Mikecon 3 in August, and I will hopefully run Axemaster in September.
I didn't end up taking home the wooden-spoon prize, despite earning it. This was, however, because I had won the somewhat more prestigious Best Presented award! This was a nice result, and one I usually put more effort into achieving. It was also nice to know the ogres still had it.
Sadly, this was the last time I play with the Ogres. I ended up selling the army to Mike not long after the event. But it's not the end; He has commissioned me to add a lot more to the army, so there will be new life in the army that I started nearly 8 years ago!
Posted by Unknown at 21:58