Much like the hiatus of '12 (brought about by Skyrim), this last summer has been a hobby write-off. This time, the culprit is Fallout 4 (A terrible Fallout game but really enjoyable as a stand-alone. Main story sacked. But this isn't a review). My last accomplishment was Dueling Paintbrushes, getting half of an Abyssal Dwarf army completed. Not much has happened since!


Just this week, The Vagabonds have announced that ConVic (Facebook) will have a dedicated Kings of War event. Much like the grand old days of 7th Ed Warhammer, the club are offering 100 tickets. This never really happened in 8th Ed after The Sundering, when the 7th Ed Warhammer crew splitting into 8th and War Machine. ConVic split similarly.

Now that 8th Ed is gone, the Sundering supposedly undone (at least we hope!). I have the weekend to part-take in Kings of War ConVic, so I'll be getting a ticket at first opportunity. This leaves me with the conundrum of which army to use. My Ogres are in a working state, albeit designed for 7th Ed and a slight tweaking for 8th. The Chaos Abyssal Dwarves are not ready.

The Ogres are in a working state, but Kings of War allows me to have them as always intended; on pirate ships! Warhammer required models to be individually based, hence the rafts. Kings of War encourages multi-basing, so I can put my Ogres onto mini ships! I've made a prototype already, using foam core and inspired by this video. Find a few steering wheels and bang up some more dowel masts and I'll be laughing. 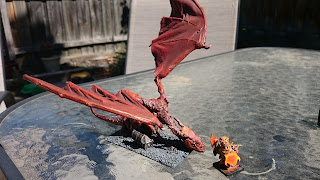 The Abyssal Dwarves need a lot more work. However, I do like getting a new army out, and I think this would be an opportunity to use my oldest model: the Dragon! This guy was ancient when bought him back in 5th Ed. All metal and literally paper-thin wings. He's quick to paint, although he'd need a new base. It'd be nice to have a reason to use him again. 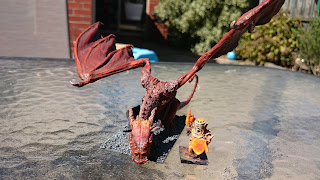 The pirates would certainly be the quickest to complete. However, having a tournament deadline is a great motivator to get the larger project moving. Feel free to suggest what you'd like to see in the comments!
Posted by Unknown at 22:08