Axemaster TO Wrap-Up and Results

Axemaster 2016 has come and gone. I just though I'd post a few of my thoughts and observations, as well as results.
On the day, I wasn't expecting to play as we had an even number of entrants. One player dropped out, meaning I was needed to step up and complete the draw! Whilst I don't at all mind playing more Kings of War, it meant I didn't get a chance to take any photos. Hopefully I can steal some off others when they post them up.

The event ran four rounds, each with a random, non-repeated scenario. I took my trusty goblins.

I only played three of the rounds; one player dropped out after round 3, giving me a chance to catch up on paperwork!
Round 1 was against Newcomer (but Warhammer Vet.) Ben Leopold and his elves. The scenario was loot, but I lost 1-19
Round 2 was against current Victorian Champ Andrew Goodman, who was a late entry. I have no idea how he ended up on the bottom table! The scenario was dominate, which ended up with a fairly close game, but ultimately went to Andrew (5-15).
Round 3 was against terrainist Owen Top, who produced the titular Top Table, an his dwarf brewers and pressers. The scenario was invade, and whilst the scenario condition was a draw, I managed to claw back 2 points on attrition (so a 12-8 result).
Round 4 was a bye, and the standard award for such a game seems to be 12 points, so that's what I took.

The day was great. There were a few minor failings of the software used to run the event (all home-made, so only one person at fault there!) I only adjudicated one contentious rules call, but such things are necessary at times (it was the top two players, in the final round). They still seemed to be good mates after the game!

There was a great atmosphere for the whole day, and I though that people were in great spirits. It was a pretty laid back tournament, although I did have to crack the whip a few times to get games done. One rookie KoW TO mistake that I made was to assume that since games were running on chess clocks, they would automatically run to the event schedule. This was a bit naive possibly, as game 1 for me was nearly 15 minutes overtime. Determined not to let the end blow out (people have places to be and families to get home to), I pushed each game to start and finish on time. Players responded well to this, and I think everyone managed to get a break here or there.

Leading up to the event, I was a little worried that entrants were a bit thin. I wanted to cover venue costs and have a little extra cash to cover extra embellishments (like trophies, etc..). In the end, I didn't make the 20 players that I needed and ended up running at a loss. I'm not upset by this, as I think the day was worth it, but I'll probably be a bit more cautious if I run any other events. I do have other ideas for tournaments up my sleeve for next year!

Speaking of trophies, Peter Spiller did a great job of designing and printing trophies for this years' winners. The first Axemaster (that I'm aware of, in over 25 years) to award axes to winners! Trophies are a great memento for players, and for some are more valuable than product. I hope we can keep this tradition going.

Prize support was great, so a big thank you to our three prize sponsors:
The sponsorship was great, and I think quite a generous offering for the number of players we had. Given support, I was able to award the following prizes and trophies:
Alright, on to results: 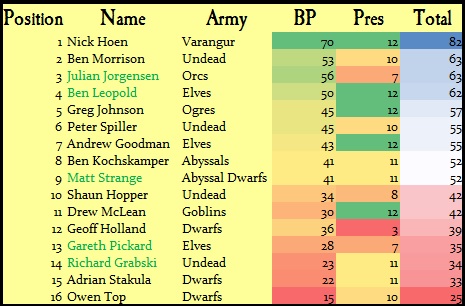 Green names are tournament newcomers. Let's hope this isn't their only one!
N.B. Ben K and Matt S are tied for 8th.

I'd love to get your feedback on the event. Even if you didn't attend, perhaps you can still make the next one better!

Thanks to all players and sponsors. Next up: MikeCon 4. Register early to support the scene!