There seems to be a bit of a frenzy at the Hampton Games Club: Firestorm Armada. I haven't seen a game taken up so quickly in years. Sure, new games have taken off, and the club has seen a lot of new players playing new games since some of the "core" games have started to decline. However, I've not seen so many existing players at Hampton buy into a new game at such a rate. It's pretty exciting, I just hope the excitement last over the summer whilst we're on a break.


I've been getting quite a few opportunities to get to the club of late; I've been every fortnight for the past month or two now. Doesn't sound like a lot, but it's better than my last 18-24 months. I've also picked up the brush for the first time since I finished my orcs.


I've started a Dindrenzi Fleet. Fortunately, they're one of the start fleets that come with the boxed game, so I'm able to split the contents. I'll get a small fleet and a rulebook for a pretty reasonable price. The Combat Company are getting a shipment in as I type, hopefully they'll arrive soon. In the meantime, I've bought myself a carrier and some frigates and corvettes. Soon I'll get my hands on a battleship, some cruisers and more frigates. I then want to get some destroyers; Dindrenzi destroyers have a knack for sitting back and pounding the enemy from afar without closing. Most other Dindrenzi ships will have to keep moving towards the enemy so that they can fire their massive guns that can only target things in the column directly ahead of them. I really like corvettes because of their speed and pack hunter rules. 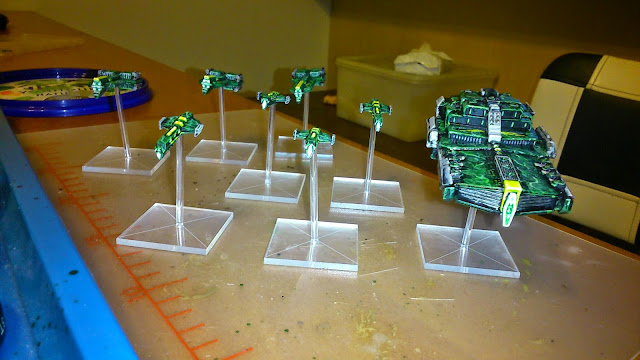 The scheme I'm working on is bone, yellow and a green marble. I've reasonably happy with the marble effect. It's pretty easily to replicate and it's not too time consuming. These photos show almost completed paint-jobs, but I still need to sort out the varnishing. I'll add a matte coat the whole model, then gloss the marble surfaces up.
I'm hoping there's not too much association with Aussie bogan sports fans!

Ugh! Starwars Armada comes out in January. I don't think I have room for another space combat game that also has Armada in the title. I think I'll just play with my Star Destroyers in FSA.