The (TableTop) Day That Was

The first (hopefully) annual TableTop Day is come and gone. Cut-out Will and Felicia were proud today. The Hampton Games Club pulled quite a crowd!


Meghs and I arrived to find the group already knee-deep in a game of Super Munchkin. 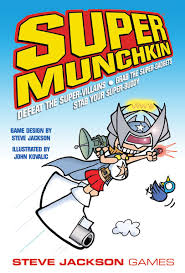 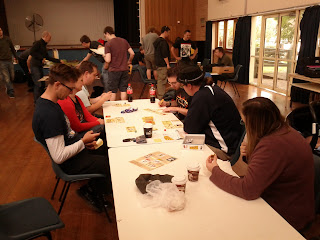 We ate lunch whilst this was going on, then we got into a game of Panic Station. 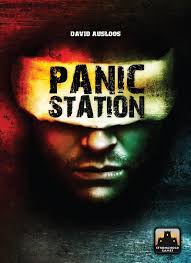 We had to have a couple of games of this to get the hang of it. Panic Station is a game that includes a traitor mechanic (Like Battlestar Galactica) and it is important that everyone knows what they're doing before starting, or the traitor element can be ruined.


Next, we got into some Bang! This is another, albeit much simpler, traitor game. 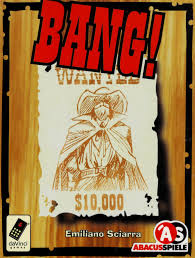 A known sheriff and a number of unknown Deputies, Outlaws and Renegades duke things our in a Spaghetti-Western themed card game. Al took on the role of Sheriff.
I like to think that Bang! lends itself to lots of clever innuendo, but really there is only the one. Used (and giggled at) over and over.

Eventually we took out the squabbling outlaws, but were almost laid low by renegade Morgan. After a long game of hot-potato and several trips to the prison, the side of Law prevailed.
Meanwhile, another group enjoyed a 6-player game of Super Dungeon Explore. Under the watchful eyes of Cut-Out-Will-and-Felicia. 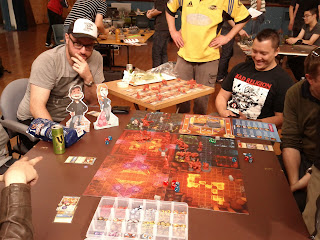 The afternoon turned out to be a lot of fun. Guys who normally come alone brought family and new friends, and there was a good sense of inclusivity- one of the key ideas of TableTop Day. I look forward to part-taking again, perhaps I'll run a public event next time. It's also nice to know that the family can participate, which bodes well for the future!

Email ThisBlogThis!Share to TwitterShare to FacebookShare to Pinterest
Labels: Board Games