Axemaster TO Wrap-Up and Results

Axemaster 2016 has come and gone. I just though I'd post a few of my thoughts and observations, as well as results.
On the day, I wasn't expecting to play as we had an even number of entrants. One player dropped out, meaning I was needed to step up and complete the draw! Whilst I don't at all mind playing more Kings of War, it meant I didn't get a chance to take any photos. Hopefully I can steal some off others when they post them up.


At MikeCon 3, I encountered a bit of a problem. Whilst playing on highly detailed and landscaped tables looks really cool, I felt is added a layer of impracticailtiy: namely rolling dice. It felt like my dice were forver getting caught in the cracked ground or gaps between board sections. I felt I needed to do something. Dice trays seem to be all the rage right now, so I felt like throwing my take in the ring.

Email ThisBlogThis!Share to TwitterShare to FacebookShare to Pinterest
Labels: Tutorial

MikeCon 3 is done. It was my first MikeCon, and my second Kings of War Tournament. Mike has been running a series of simple, non-nonsense tournaments to try and rev-up the Kings of War community. Number 3seemed like a hit!


My goblin army army included:
A Regiment of Fleabag Sniffs with Caterpillar Potion
6 Regiments of Spitters
2 Hordes of Trolls
A Big Rock Lobber
2 War Trombones
A Giant
A Slasher
A Naked Biggit
A Mounted Flaggit
3 Wizes with Wind Blast, Lightning and Bane Chant. One had the Inspiring Talisman and one had the Fire-Heart Amulet

The army was what I could produce with the models I had a minimal effort to "fix up" (ie, convert from a Warhammer Army). I treated all of the Orcs in the army as Goblins, as I didn't have enough of either to make a main force with allies.

Andrew Set up with a bit of a fire base in the middle, and two hard-hitting components on either side. I set up in a similar fashion, but for some inexplicable reason deployed my spitters in two lines. My mages went in and around them. I put a monster, horde of trolls and an inspiring hero on each flank, backed by a trombone.

Andrew came right at me, and applied enough pressure on each flank to punch a hole in it so that I wasn't able to effectively counter-charge. My spitters floundered in the middle, unable to decide on a target so losing much of their effectiveness. Eventually Andrew crushed my flanks, and whilst I managed to take something out on each flank, my combat units buckled and he was able to feast upon my squishy spitter center.

This game (in fact, much of the tournament) was a bit of a learning experience for me. I realised that whilst my spitters had numbers, I still needed to pick a target early on and concentrate fire. A double-line was silly and basically wasted half of them. Hills were much more of a boon than I previously though, and luckily all my other games had ample hills in them. I had plenty of muscle in this army (despite the masses of spitters), but I had to use it carefully.

Abyssals were another new experience for me. Michael's army had some Flame Bearers (two regiments, two troops), a Horde of Lesser Abyssals, Two Regiments of Succibi, Two Efreet on foot, and Abyssal Champion on foot and an Allied Regiment of Son's of Korgan. Virtually every unit had a magic item on it, but I can't remember what they all were.
I made a bit of a mistake in setup here; I allowed a loot counter to be placed just outside of a forest, and didn't choose that side. This made it easy for Michael to get a unit up to the counter, grab it, and run, all without being seen (due to the forest hiding him).

In this game, I set up with my spitters in the middle, in a single close-packed line. I then put a group of trolls+monster on each flank. The spitters sat guarding the central loot counter, and the combat groups went for each flank. Due to a big, tall rock stack, the game was effectively split into three smaller sections; a fight for each counter.

On my right, I had Trolls, Slasher, Biggit, a trombone and Fleabags facing off with an Efreet, Regiment of Succubi, Troop of flame bearers and a somewhat distant regiment of Sons of Korgan. My stone thrower was on a hill on this side, too. The loot counter here was in the middle of a forest.
The succubi ignored the counter to begin with, and charged my slasher. Despite being inside the forest, and succubi routed the slasher in one charge. Fortunately, I countered with my trolls and fleabags, leaving me in a strong position. The trombone managed to get rid of the efreet, and the stone thrower took out the troop of flame bearers and the sons of Korgan with a bit of help from the trombone. One token secure.

Meanwhile, on my left, I had a tough time spotting the enemy because of the aforementioned screening forest. My trolls and giant ran up to contest as best as they could, supported by the flaggit, whilst the spitters sat back on the hill and provided covering fire. The enemy had provided a Regiment of Succubi, Troop of Flame Bearers, Horde of Lesser Abyssals, Regiment of Flame Bearers (with the Jar of the Winds) and Abyssal Champion. My combat units pretty much mutually annihilated his Succubi and Lesser Abyssals, and I had a shooting match with the Flame Bearers (who were the last to hold the objective). Eventually I shot out the Flame Bearers, and the objective was uncontested at the end of the game.

Centrally, I had three Spitter Regiments and Wizes facing off against a Troop and Regiment of Flame Bearers and an Efreet. The shooting match was reasonably even, but when my Fleabags managed to come in after securing my flank, I was able to take the center objective.

I feel that I concentrated fire a bit more effectively in this game, as well as using my combat detachments better as a formation. I brought more muscle to the flanks, and had enough chaff in the middle to clog it up. My first win- huzzah!

Matt's army was quite similar to Andrew's, but replaced the Dragon-mounted characters and a second unit of knights with a whole bunch of Trees; A Forest Herder, Horde of Shamblers and a Regiment of Hunters. Instead of a horde regular archers, Matt had taken sea guard. This army had much more of a Wood Elf theme to it, match my own. Matt had a Dragon amongst his models, despite not having one in his list, which really psyched me out (it shouldn't have, I had read his list!)

The table was quite devoid of difficult terrain. There was a forest on one flank, and a bunch of buildings on the other. All of the objective markers were scattered among the buildings. I deployed all of my spitters in front of the objective, supported by rock lobber, trombones and Wizes. Matt deployed opposite. I then put all of my fast-moving, hard hitting stuff on the other flank.

Matt ran forward with his tree-spirit vanguard moves, and the game was afoot. I had first turn, and managed to focus enough firepower on the Dryad/Hunters to route them. This became a bit of a recurring theme- each turn I would focus enough arrow fire, lightning and rocks to take out a combat unit; Dryads, Forest Shamblers, Drakon Riders. The fact that his army approached one-at-a-time meant I could do this quite effectively. Vanguard had worked in my favour, here.

Meanwhile, my trolls, giant and slasher moved up on the off-flank, and managed to get the knights and sea guard.

The spitters were able to walk forward and grab the objectives whilst the giant clashed with the Forest Herder in the the middle.

I believe this was my army performing at its best; The spitters concentrate fire to take down threats one at a time and the combat elements managing to face the enemy's flank and hit coherently. Vanguard really didn't work in Matt's favour; I was able to take advantage of it and shrug off some units that could have really messed with me if they had managed to get stuck in.

The Ship has Sailed...

So after ConVic, an offer was made to buy my Ogres. I have, in the past, discussed selling them, but it certainly wasn't on the radar at this time. However, I was happy with the offer and even better; it came with a comission to produce more for the army. I can continue working on the army without having to worry about fianancing it. Sure, it's not my army any more, but that doesn't detract from my satisfaction in building and painting it. It did leave me in the lurch, though...

ConVic is done for 2016. Here's a bit of a write-up. I must admit, I only thought to take photos from game 2, and I didn't' bother then because Greg was already taking them an he had an actual camera. I'm sure he'll do a write-up soon; I'll link it when he does. Enjoy my report!

If you read my blog and you're not aware that ConVic is this weekend, that puts you in an extremely small subset of the population. Nevertheless, ConVis this weekend, and having been on holidays from work I've been busy at the hobby table! I'll get some whole army shots when I've got some better light (probably at the event), but you can see what sort of progress I've made.

Bring me the Horizon!

I'm getting pretty close to my goal! Here are a few pics of where things stand: 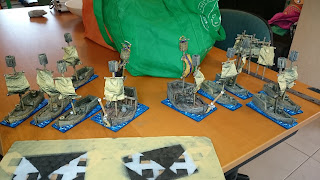